We will publish the next Think Tank Review in the second half of June, with the usual rich harvest of publications. In the meanwhile, here are some of the papers already selected by the busy library team (by the way, you can support us by sharing on twitter). In May, we found a convenient mix of publications looking back and ahead.

A year has passed since the 2014 EP elections (here’s what we were reading at the time). Conveniently, various think tanks looked back at the elections, between niche parties and grand coalition, Spitzenkandidaten and fragmentation:

A highlight in May was the Eastern Partnership Summit in Riga. Here is a selection of what think tanks East of Brussels had to say:

From 30 November, France will host the 21st Session of the Conference of the Parties to the UN Convention on Climate Change (COP21/CMP11, or simply “Paris 2015”):

Other challenges on the horizon…

Among the avalanche of publications on what goes by the name of Brexit, we could not miss this legal analysis in English by Jean-Claude Piris, former Director General of the Council Legal Service. Political France is bracing for the 2017 elections; public expenditure will no doubt be a hot issue. Here is what Institut Montaigne had to say in May (in French). In the meanwhile, the Commission published its Better Regulation proposals; here is a CEPS commentary.

ILO published its World employment and social outlook in May, on ‘The Changing Nature of Jobs’. To be read in conjunction with the many publications on social policy we found last month:

And this is just a preview. Watch out for the full Think Tank Review in a week or two.

Follow the hash tag #EUCOLibrary for tweets by our library team on new publications and other EU-related topics. Previous issues of the Think Tank Review are available here. 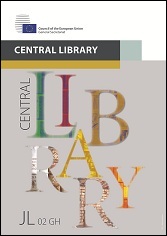